Our little budding chef turned 12 a few weeks ago in the midst of a month full of craziness.   We had a wonderful day celebrating Maddie, just haven't had a spare moment to write about it!

Maddie pretty much planned and carried out the majority of her party.  I wish I'd taken more pictures of the process, but, like I said, month of craziness...  Thankfully that craziness includes my parents being here, and it's always fun to have more family around for birthdays.

So the theme for the day was Cupcake Wars.  (not as in ginormous food fight but as in the TV show focused on a decorating competition)  Maddie has this adorable cupcake decorating book that we kind of used as inspiration.  She picked out 3 different cupcake designs beforehand and baked around 4 dozen cupcakes the night before- plain chocolate and vanilla.  We also assembled all the decorating supplies in advance to try and somewhat reduce the craziness at the party.  We divided her guests into 3  teams for an intense cupcake decorating competition.

Even though it was a cupcake decorating competition, we still did a birthday cake.   Maddie's favorite from a few years back is still the rainbow cake. 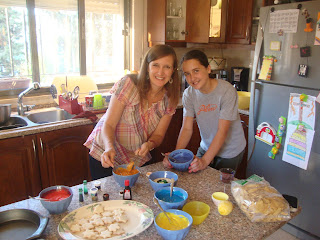 Anabelle was all about "helping" to color the batter.... 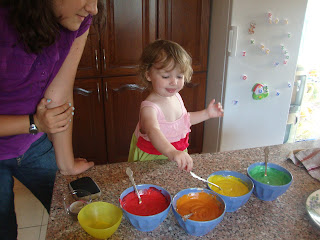 Although the cake tastes amazing, I have yet to have any luck with the icing in my un-airconditioned kitchen on this side of the world.  It's a cream cheese buttercream that you combine with a meringue- sounds weird but is so yummy.   The white cake we do is this coconut layer cake from scratch.  The coconut flavor is subtle but so good.  (this is also the site with the icing).

Anyway, as we were assembling the cake the night before, literally within a manner of seconds it started collapsing right about the time we got the yellow later in place.  We quickly grabbed my trifle bowl and stuffed it over the top and mostly salvaged the potential mess... 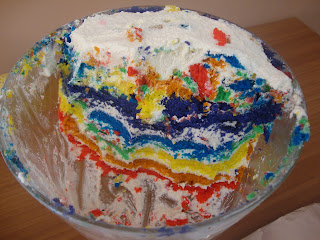 The main thing was that the birthday girl was happy- and she was. 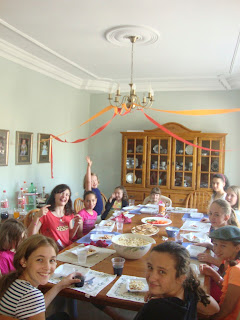 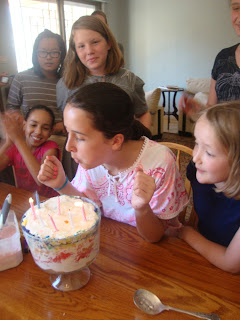 So after lunch was served and bellies were full, it was time to sugar up our party guests even more- bring on the cupcakes!

Like I said, we had divided everyone into 3 teams in advance and assigned them each a different cupcake design to be revealed at the end when they presented to our distinguished panel of judges (my dad and Jason....)

The first team, had the popcorn cupcakes.  I assigned these to the younger girls because I thought they would be a little easier (they definitely involved less icing which was good), but they were hard! 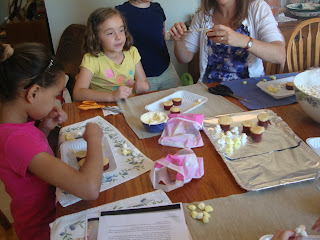 Basically, we cut mini yellow and white marshmallow into pieces and assembled popcorn "kernels" and then stuck them to the top of the mini cupcakes using vanilla icing. 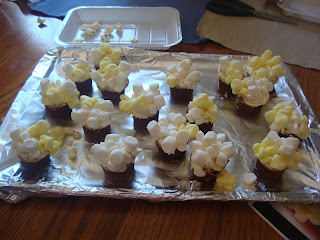 These 2 cuties loved cutting the marshmallows! 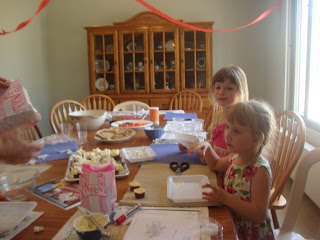 And these 3 messpots were more interested in goofing off... 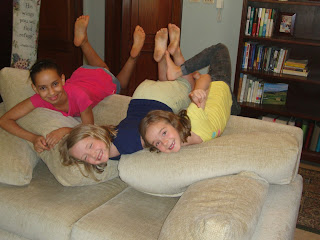 The oldest group definitely had the most complicated cupcakes as far as icing and decorating skills.  The were hard at work dividing and cutting up oreos, arranging Jr. Mints and yellow owl beaks etc. 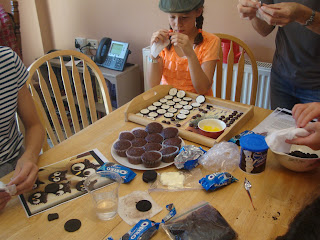 The middle group (Maddie's group) was done before I could even get a picture of them!  Their's looks impressive but I'm pretty sure it was the easiest...  Basically they glopped icing and big chocolate balls on the top of a platter of cupcakes.  But it really does look like spaghetti and meatballs, right?! 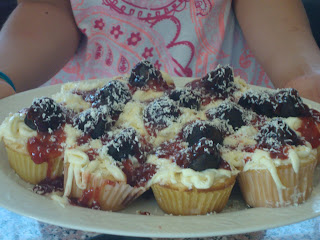 So here is each group presenting their finished product to the judges.
Aren't these owls adorable?! 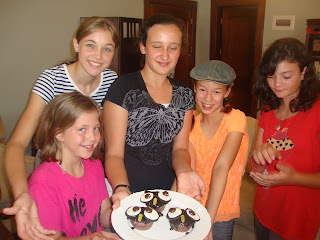 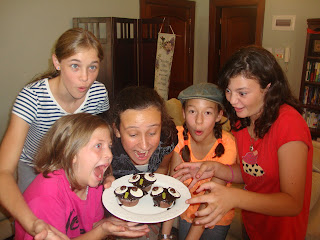 The little girls were up to the challenge of the popcorn cupcakes.  So cute! 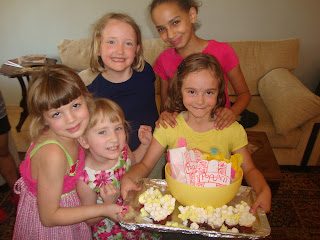 And Maddie's team easily revealed their spaghetti and meatballs masterpiece... 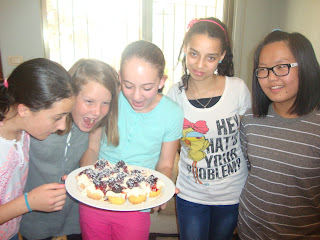 The judges had a hard job, but all teams won in the end- for best taste, presentation and creativity.
If you don't live in a house with extreme competitors, you may not recognize the importance of "everyone being a winner" in certain situations, but believe me when I tell you that it was called for here... 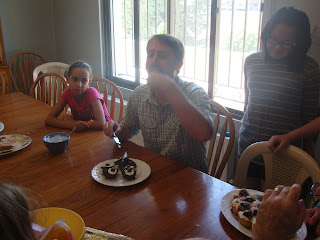 This little sweetie slept through all of the decorating fun (definitely a good thing), but she had her share of cake after the party! 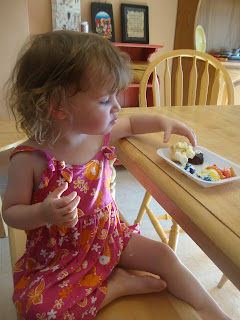 Happy Birthday Maddie!  You have taught me how to slow down and enjoy the beauty of each day.  I'm so thankful for your compassion, your creativity and your love for everyone around you.  Can't believe it's been 12 years! 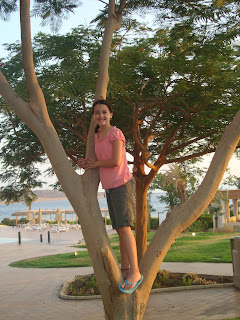