I think it would be hard to come by a better illustration of the creativity of God, than looking at the developing personalities of the little people in our lives.  If you have more than one kid, you probably understand what I mean.   Or I guess even if you have one, you understand, but when you have more than one, it definitely accentuates the differences!  Doesn't matter that they come from the same gene pool, raised by the same parents, kids are just so amazingly unique.

I love all of my girls, and they are all amazingly gifted in their own unique ways.  For the purpose of this post, though, I have to focus in on Miss Naomi.  If you know her, you know that she  marches to the beat of a different drummer.  And I mean that in the best possible way.  Naomi is just one of those kids whose mind seems to work on a different level.  She does things with her toys that I personally would NEVER think of (and honestly that may not be saying alot since my creativity level is pretty pathetic but still...).  And the things that come out of her mouth sometimes...  Oh. my. word.  I actually dedicated an entire post this fall to "Naomisms" from the last 4 years or so that I had recorded on my facebook wall.  You can find that here.  Anyway, in honor of her 7th birthday (!!!) a few weeks ago, this post is dedicated to Naomi and her ideas.

We had an interesting conversation recently about ideas.  Naomi and Maddie were cleaning their room, and Naomi had the "great idea" to have a play-off on a favorite Wii game and whoever won wouldn't have to help the other clean the bedroom.  Well.  I'm sure you can see where this is going.  They had the play-off, Maddie won by a landslide, but graciously told Naomi she would still help her finish cleaning the room.  Naomi was still extrememly upset.  In trying to get to the bottom of the conflict, I realized that it came down to the fact that Naomi was quite bothered that her "fabulous idea" hadn't turned out the way she wanted.  She was completely distraught despite the fact that Maddie was still going to help her.  Obviously she had hoped that she would be the one to get out of cleaning the room, then, of course, it would have been a great idea.  I finally got her calmed down (if you don't know Naomi, she is VERY dramatic and takes everything VERY seriously and VERY personally).  Anyway, I got her calmed down, and said, "Naomi, it just really wasn't a very good idea.".   Well.

To back track just a little.  My parenting style is not one to sugar-coat everything for my kids.  I love them dearly and desire for them to succeed, but sometimes the best life lessons come through failure.  How else do they learn?  I don't believe that every child who participates in a sport should necessarily get the trophy.  I don't believe that every conflict in the classroom is the teacher's fault and not the kids. Sorry, I digress.  The point is, I didn't have a problem telling my sweet little 6 year old (at the time), in the gentlest way possible, that her idea, in this context, simply was not a good one.

Well you would have thought that I told her that they closed Disney World forever.   "MOM!  That's so mean.  I'm right here, and I hear you saying that!"  "You said I had a bad idea!"  "You said my idea wasn't good!"  etc etc and on and on it went.

So we talked through the whole idea thing.  We talked about how I love her creativity and how I always want her to try out the amazing ideas that her mind comes up with.  But we also talked about how sometimes, ideas just aren't great.  They don't turn out the way we plan or think they will, and we learn and move on.  I've realized that one of the hardest things for Naomi that my other girls really didn't struggle with that much is accepting disappointment.  Of course, all kids deal with this to an extent, but I've really had to pay a lot of attention to Naomi in the area of accepting a disappointing turn of events.  I'm not really sure what it is about her particular personality that makes this difficult for her but it's provided some interesting parenting lessons for sure.  As I've prayed through helping Naomi in this area, I've realized that I think part of it is her level of confidence in the things her mind thinks up.  It's quite high, which overall is a wonderful thing.  But when something doesn't work out the way she envisioned it, it can be pretty traumatic for her!   When she was only 4, in response to me asking if she knew how much I loved her and that God had made her special, she replied "Yes, and I'm so cute and have very good ideas."   HA!  Little mess.

Well, she is learning that not all ideas are good, but I'm thankful that she is continuing to try things out.  Just a few weeks ago, I was sitting in the recliner in our kitchen working on email, and she was very hard at work at the kitchen table.  She was completely oblivious to my presence but was hard at work with her Toy Story Lotso bear.  She had shoe strings that she was attempting to attach to his hands and feet in order to turn him into a puppet.  After several unsuccessful attempts, she finally set him down and said to herself "huh, that's the first bad idea I've ever had!".  Sweet girl!  Funny thing is, she didn't even want help from me.  I could have jumped in at any point and helped her, but when she has these ideas, she likes to figure things out on her own.


Here is a sampling of Naomi ideas and projects from around house over the past year or so.

It's not unusual for me to walk into my kitchen and find something like this... 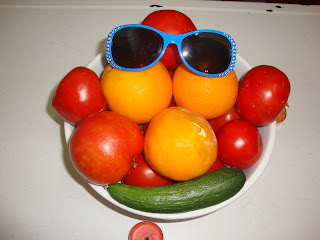 Poor Mia is often the victim of one of her "ideas".... 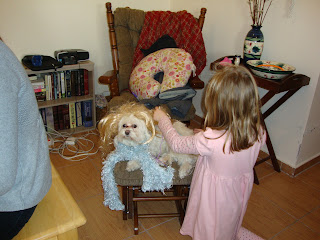 (Naomi is obviously much more pleased with the results than Mia...) 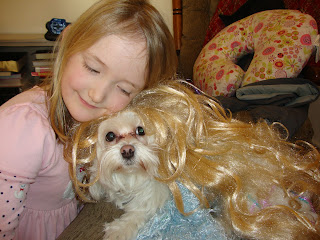 Anabelle could probably also be referred to as a victim of some of the ideas.  Naomi is often the instigator behind some pretty creative babysitting tactics... 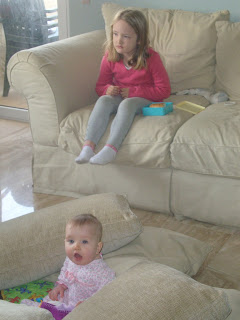 (the surrounded by pillow technique quit working a LONG time ago...) 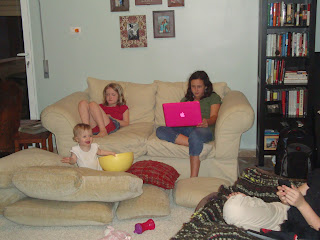 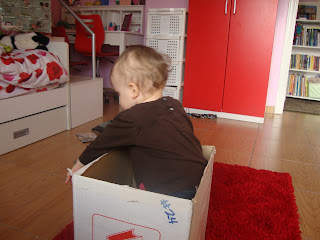 Confining to a doll crib works too... 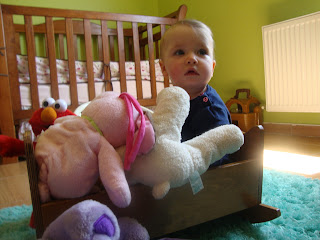 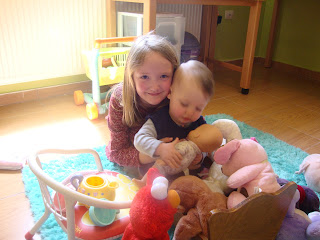 Anabelle also benefits from Naomi's creativity.  She loved drawing with Naomi on this "runway".  I didn't get a picture but I think this set-up was intended as a runway for modeling... 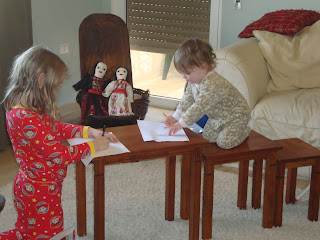 And one day, Naomi set up a campsite and read stories to Anabelle in the sleeping bags 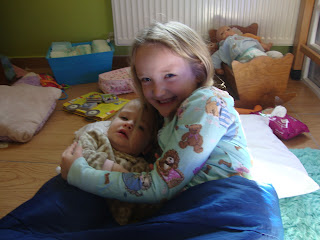 (you can't tell from the picture, but AB did actually enjoy this!)

And like I said before, the things she does with her toys are quite creative.  All of these were things I walked into, not that I helped set up in any way.... 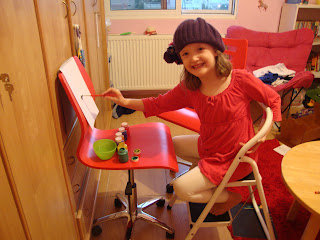 A new hat stand for our front door.. 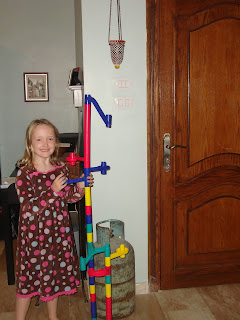 Every cowgirl needs a horse... 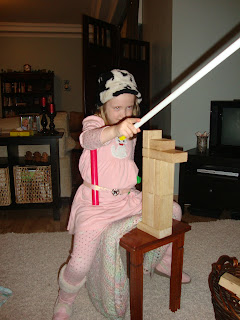 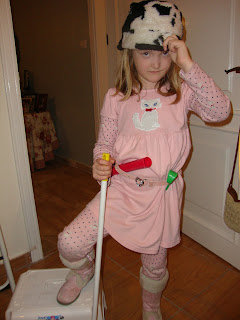 And look out matey, this pirates on the prowl! 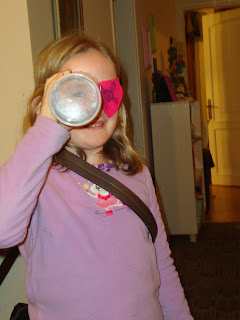 (she made the patch, Jason's belt is the strap for the telescope- otherwise known as an empty Pringles can...) 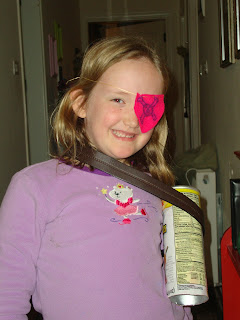 the perfect spot during hide-n-seek 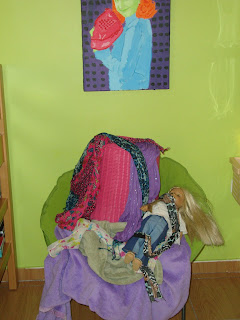 (yep, Naomi is under there)

And every so often, I'll find things randomly set up around the house...

Here was something Naomi created for gaining entrance to her bedroom.. 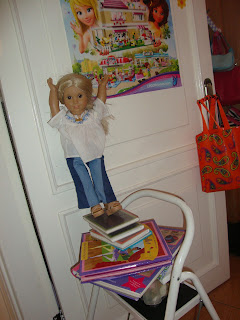 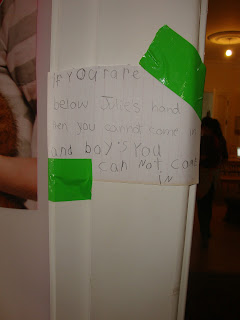 (in case interpretation is needed it says that you have to be below Julie's hand to enter.  Also, no boys allowed!)

Apparently Lotso needed his own seat for watching TV...

I'm a little biased of course, but I know God has amazing plans for our little creator.  I'm thankful that she's learning early on how important it is to push forward with trying her ideas even if they turn out to be not so great.   I pray she will keep her sense of confidence and grow in wisdom and discernment in the years to come.  And of course, my ultimate prayer is that her confidence will be placed in her Creator, in the One who made her uniquely and is ultimately the source of her ideas.

"But blessed is the man who trusts in the Lord, whose confidence is in him."
Jeremiah 17:7