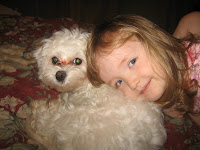 So until the last year, I would never have called myself a "small dog" person. I grew up with a mammoth black lab who was probably half bear, and Jason and my first baby was Sam, the border collie- hands down the smartest dog in the world. That said, I wasn't entirely thrilled with the idea of getting a small "yappy" dog when we decided to take the plunge about a year ago and get the girls their much begged for puppy.

Well, "Mia puppy" has quite effectively wormed her way into all of our hearts. Thankfully she is not much of a barker so "yappy dog" isn't a good description anyway. She's also, (bless her heart), not the smartest pea in the pot, but we love her dearly anyway. Jason has yet to convince her that the garbage can is not meant for her constant consumption despite the fact that he has quite literally "scared the pee out of her" when catching her in the act, and she is still quite convinced that the little white dog staring back at her from our balcony door is a much unwelcome intruder.

She loves all of us as much as we love her, and will plop herself down in the middle of whatever action is going on in the Cox house- even if that means smack in the middle of a game of Monopoly. She is mostly under my feet probably because I"m usually the one if the kitchen cooking "dropping" things as I go. As I write this, we are still in the states, so at the moment we are most thankful for Mia, because she is causing the girls to be excited about returning to Lebanon! Here are some pictures of our sweet little Mia. 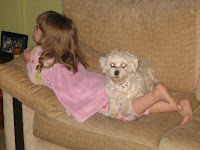 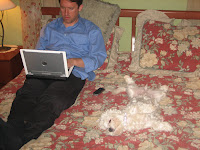 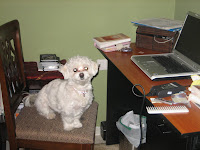 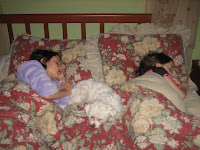 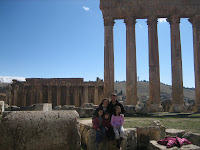 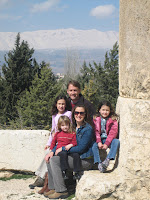 So it took me almost five years of living in Lebanon to make it to one of our most famous tourist sites and it was well worth the wait. Baalbeck is the site of some incredible Roman ruins and we picked a beautiful winter day to go. It can kind of be hit or miss as to whether the sky will be crystal clear or incredibly hazy and we really lucked out. We were in the midst of this massive layout of ruins with the beautiful snow capped mountains in the background.

One thing that I am still not used to in Lebanon as we have visited various historical sites over the years, is the alarming lack of public safety measures in place. Whether it be a crusader castle with massive drop offs from the top level and no rails to help you climb various places, or the hippodrome in Tyre where you can pretty much climb all over any part of the ruins, you would think I would be used to it by now! Baalbeck was pretty much the same in that we could climb all over everything. Thankfully though it was mostly wide open spaces for the kids to just enjoy running around outside the concrete jungle of Beirut.

The girls had a blast climbing and exploring: 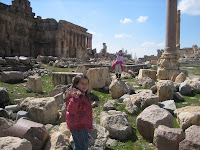 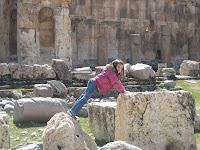 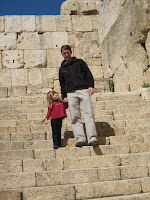 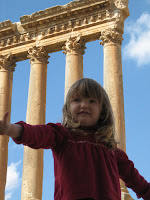 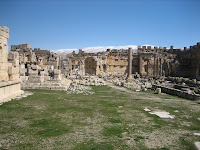 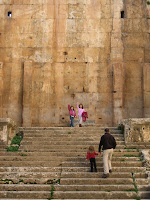 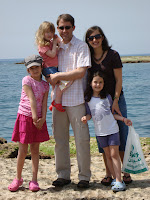 Yes, I'm still here and still blogging, and yes, it's been almost 4 months since I've even opened up the blog to look at it, much less write anything- oops... But I"m back and I'm going to try and play catch up mostly with picture entries.
It's been a busy spring. Jason has traveled alot. We had visits both from Aunt Allison and Nana. The whole family went to Jordan for a week for meetings/vacation. We're getting really excited about our trip to the states one month and two days from today. The girls are counting down!
I guess it took the Lebanese parliamentary elections and being confined to the house for almost three days for me to find the time to sit down and sort of catch up. I"m sure a lot of stories along the way will probalby be forgotten but I'll at least try and post some pics to chronicle the last few months. Hopefully I'll do a better job staying on top of things from here on out but I'm not making any promises...
Posted by Kelli at 8:31 AM 3 comments: