Although it's true that Amman is kind of the middle of the desert and you have to get used to it's unique beauty (especially for this outdoors girl who needs lots of green and wide open spaces), it's also true that you don't have to look very hard to find some pretty amazing outdoor adventures.  Asking around to other expats, we were clued into this "wadi walk" (a wadi is technically a valley but  it's often a dried up river bed-or sometimes not dried up).   HERE'S a post I did a few years ago about a walk Jason and I did with friends.

Anyway, lots of trails and hikes are actually decently marked (or at least known) here but the directions for this one went something like "Drive to the Dead Sea, go past the hotels and over a bridge.  Park by the bridge and walk under it and start heading up the canyon/dry river bed.  After about 30 minutes you'll come to a ladder that leads to an amazing waterfall."

That was mostly true although with our group it took a bit more than 30 minutes!  We went with some good friends whose kids are about the ages of ours and it went something like- all kids 10 and up were so far ahead the whole time that we really didn't see them and the four 40 something adults brought up the rear with the 5 year old.

She was quite the hiker! 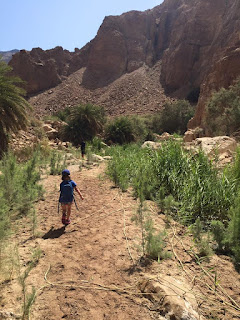 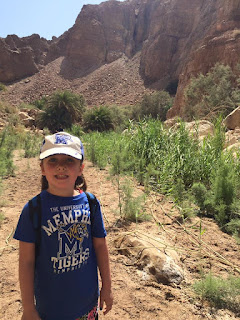 Sadly, I forgot my phone and I kept forgetting to tell Jason to take pics so I didn't get tons but it was beautiful.  We got to the "ladder" and, ok, it was a ladder right beside a small waterfall but when you got to the top of the ladder, you had to use a sort of repelling rope that someone had placed in order to get up over the rocks to the next level of hiking.  By the time the adults and 5 year old got there the older kids minus Naomi were already up and over.

I may or may not be a wee bit scared of heights both for myself and those around me.  We made the executive decision that Jason would stay back with Anabelle and possibly Naomi who was still wavering as to if she could get up and over or not.  She decided to give it a try.  Here she is with our friend after climbing the ladder at the part where she had to basically climb the rope to get over the rocks.  Well..  It wasn't happening.  She was frozen and freaking out.  Another guy was coming down with his family and basically he leaned down and pulled while Craig pushed and they got her over.  (Jason watched from the bottom with Anabelle) 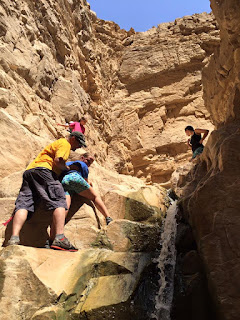 Me standing back not wanting to watch if Naomi went crashing down the rocks and Abbey wondering if we are ever going to get over... 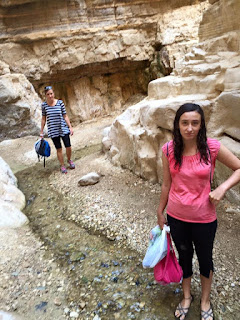 So glad we got over and Jason claimed to be happy to stay below with Anabelle.

Such a pretty waterfall and tons of rocks to climb! 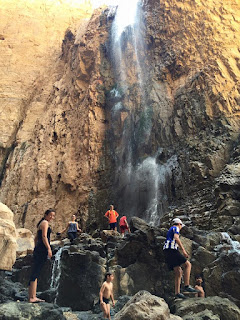 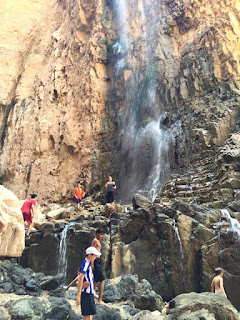 So after about 10 minutes of sitting watching the kids play etc, Craig, our friend said he was taking one of his teenage boys and they'd go back and get Jason and Anabelle.  They basically told me not to come because I wouldn't want to watch which was quite true.  This was after seeing several other kids younger than Anabelle running around up there.  He headed off and less than 10 minutes later, Anabelle comes prancing up.  Apparently it went something like Jason helped her climb the ladder, handed her off to Craig who handed her off to Ethan and she didn't bat an eye.  I think it's very good that I wasn't watching and possibly that there are no pictures of the actual ladder for grandparents to be horrified at! 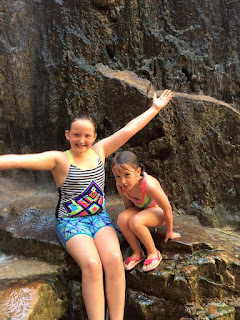 And of course, no day is complete without a little friendly competition in the form of throwing rocks at coke cans (can't see them) 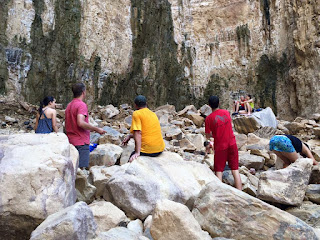 Got a few pictures of the trek back down the ladder.  Jason and the guys wisely went about 20 minutes before the rest of us to get Naomi and Anabelle down so I wouldn't have to watch!

The teenagers made it look way easy... 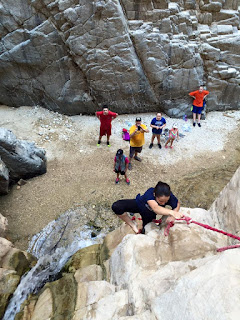 (Did i mention that I let people- who I love and trust- carry my 5 year old down these rocks?!)

Heading out- such a fun day! 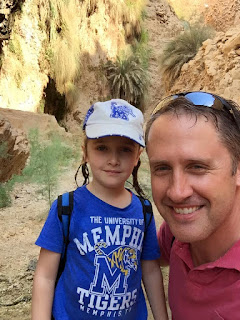 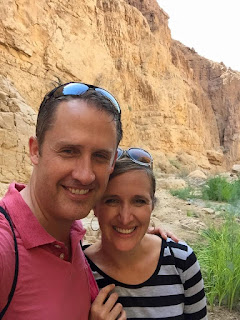 The best kind of exhaustion!
Posted by Kelli at 12:48 AM

So Fun!! I don't think my five year old would have had a problem with it, but my husband? Would probably elect to stay back even after someone came to help, ha!