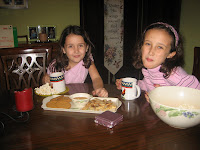 We had the extra blessing this year of having two Thanksgiving celebrations. One with just our family on Thursday (a first for us) and one with 25 other Americans whom we live near and work with on Saturday. Since it's not a holiday here, the girls went to school on Thursday so I used the mornign and early afternoon to get our Thanksgiving feast ready. It was my first attempt at a turkey and I discovered that it's a pretty fool proof process (especially when you have one of those oven bags!).

When the girls came home from school we had pumpkin dip and cinnamon crisps and hot cocoa. We thought we were going to get the Macy's parade on TV because we have a channel that shows the Today show, but they ended up showing more news than anything else with just an occasional clip of the parade. 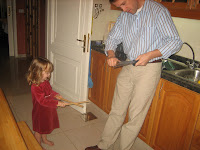 Here's Naomi and Jason getting ready to carve the turkey. I'm not sure where she found those two wooden sticks, but she came in and saw Jason sharpening the knife, and reappeared a few minutes later scraping the sticks together just like daddy. 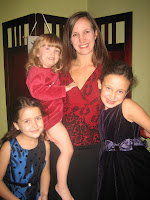 The girls wanted to dress up for our meal, so they wore their new dresses that Annie sent in a package and we at by candlelight. 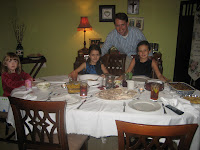 We used our African tablecloth (Abbey commented the the "pilgrims" on the tablecloth sure were funny looking). We had turkey, cornbread dressing, cranberries with horseradish (sounds weird but SOO yummy), spinach casserole, sweet potato hash ( I was the only one that liked this but I had found it in a Southern LIving and really wanted to try it), Memommy's roles with Nanny's muscadine jelly, and Memommy's pumpkin chiffon pie for dessert. Naomi, by the way, is now a huge fan of pumpkin pie! Anyway, it was a very special evening for us. We realized that we really dont' have that many holidays with just the five of us and it was really nice for a change. 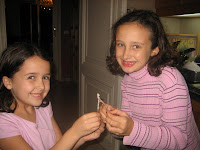 I almost forgot, the girls were really excited about wishing on the wish-bone and true to her competitive nature, Abbey was quite upset when Maddie ended up with the (much) bigger piece. She was being somewhat pouty and when Jason chided her she said, "but daddy, my wish is that all the people would know Jesus. That's why I'm upset!" We reminded her that this was a prayer not a wish, and that God is still in the business of answerign prayers (even if she got the small piece of the wish bone!).
Posted by Kelli at 6:38 AM

I'm glad you guys got to have this special day. The meal sounds decadent. but what the heck is meommys? :)

kendra's comment made me laugh! memommy should have her own brand of food products and then everyone would know who she is.

your girls are beyond precious!

can you share the pumpkin dip recipe? did you dip the cinnamon crisps? were those homemade? if you'll share, i'll finally send you my hummus recipe. :)