From the mouths of babes

My last post with the picture of the "D" word written on her cup in her precious little 4 year old script made me think of a few other stories of misspoken words in the Cox house.

First, let me just clarify that cursing, at least of the four letter more serious words has never been something that I personally have struggled with- not even in my head.  I'm pretty sure I can honestly say that I even made it through natural childbirth three times without a four letter slip.  Now, please don't think I'm tooting my own horn- I'm just saying this is not one of my issues- that's not to say that I don't have plenty of others!  I would also be lying if I didn't tell you that I have been guilty of teaching my kids plenty of choice phrases of the slightly less offensive variety.  There have been plenty of "darn-its" and "oh my goshes" and I'm pretty sure that I heard Naomi the other day say, "oh crap".  Thankfully big sister Maddie was right there to tell her in no uncertain terms that "that is not something that we say".  Apparently Maddie was so serious in her rebuke that it sent Naomi off hiding under the coffee table for a bit. 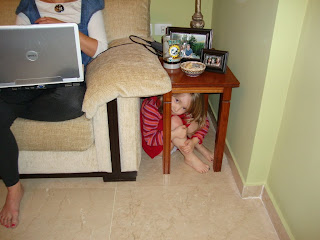 Anyway, I digress.  I do have a point, or at least some funny stories to tell.  The first is about sweet Abbey, our little reader.  At the time she was reading, "Harriet the Spy" a kids' fave I"m pretty sure and not one that I had felt the need to screen.  She was in third grade I think.  Anyway, I picked her up at school and as we were walking to the car she started with her almost daily ritual of rattling off her list of places she wanted to go after school- burger king, the park, the corniche (big walkway down by the mediterranean where the girls ride scooters and such).  This particular day we were busy and I said, "no, not today".  Without missing a beat she looks at me and says, "Well, damin" (with emphasis on the "N" at the end of the word).  Of course after I regained my composure (I was internally cracking up) I explained that that is something we do not say.  I must say that I was thankful that my then 9 year old had made it that long without actually hearing the word, since it was obvious from her pronunciation that it was something that she read (In "Harriet the Spy" of all places!).

Next story is on Maddie.  We have a somewhat tradition (somewhat because it doesn't happen that often but tradition because it happens often enough that the girls beg by saying, "but we always....") of ordering pizza and watching old "Cosby Show" DVD's on Thursday nights.  (I think this started as a Thursday night thing because Jason and I used to have a Friday night date night which hasn't happened nearly as regularly as it should anymore...).   Anyway, we were watching Cosby Show one night and Cliff comes out with, "well, you're damn right" clear as day.  Jason and I glanced at it each other, hoping it had been missed by little ears (should have none better).  About an hour later we were cleaning up dinner and had asked the girls if they wanted to play a game before bed.  In all of the passion that only Maddie could muster up, she says, "You're damn right!".  Again, I must say that on some level I'm thankful to have daughters naive enough to have not heard these words before to know that they shouldn't say them!
Posted by Kelli at 3:30 AM

hilarious! So far, Sarah Ann just says (in the most sarcastic way) "Oh Good Grief" She learned it from watching a lot of Charlie Brown. Every once in a while she likes to be like a teenager and say "oh my gosh" usually followed by, "that is so cool!"

It amazes me how kids at Naomi's age come up with these things. Some one try to tell me there is no such thing as "Original Sin!" If anyone has ever watched two babies play together they must admit that we are rotten to the core. Oh the precious gift of grace we don't deserve!

When I was a young Daddy, you and I were playing on the coffee table in the living room on Prescott street (I know that you have heard me retell
this story at least a million times, as John would say, humor me one more time!). Something fell off the coffee table table, and I said, "Dadgummit!" A few days later the same type of thing happened,and you said, "gummit!". I knew then that parenting was going to be an adventure, but so far you haven't disappointed me :-)