Sleeptalking and an uncanny ability to lose and/or forget

By the time Abbey was around 3 or 4 there was kind of a general consensus among family and pretty much anyway who knew me as a child that she was and is my spitting image.  I don't necessarily always see it unless I look at pictures but what I do see is how much she is also like me in her actions.  I don't think there will ever be an issue of me not "getting" her.  I was thinking about this just the other day when I was lecturing here about something she left at school (thinking something to the effect of how my mom would be rolling her eyes if she could only hear me now!).  Anyway, although Abbey is definitely more like me in both appearance and demeanor, she pulled a big time Jason the other night (with a little hint of Kelli as well).

The big time Jason that she pulled relates to sleep behavior...  So Jason would probably argue this point but he is definitely the king of weird sleep behavior in our home.  He thinks that I have my share of odd sleep behavior but as the one writing this post, we're just going to stick with the facts which are that he is king.  His parents tell stories of Jason and his brother talking to each in French as kids.   There was the time in college that he woke up standing in the 2 foot square space between his bunk bed, his dresser, and the wall.  There was the time shortly after we got married that he bolted up in bed and yelled "what the HE$%## is that?!" pointing at his grandparents armoire (we were staying the weekend with them).  Another time in our newlywed days, I woke up to a weird sound and saw him down at the foot of our queen size bed attempting to pull the bed across the floor and "get us out of the way".  In our early marriage days, I tried for a while to keep a notebook by my bed so I could write down all the wacky things he said in the middle of the night.  It doesn't happen as often now although he does occasionally plan meetings or give taxi directions (in Arabic) in his sleep...  Occasionally he goes on business trips and stays with a colleague and lets just say there is a never a shortage of "guess what Jason did in his sleep last night" stories...

So last night a good hour after Abbey had gone to bed, she comes wandering into the living room with a very glazed over look mumbling something about her retainer and brushing her teeth.  I told her she was asleep and sent her back to bed.  Well, this morning she woke up and couldn't find her retainer anywhere. We looked all through the sheets and around on the floor.  I reminded her about coming into the living room but she had no remembrance.  We figured she must have removed her retainer in her sleep for some random reason.  Thankfully she has a back up and I really didn't think much more about it.

Moving on to the "hint of Kelli" in Abbey's little routine last night.  See, I seem to occasionally have a wee bit of trouble keeping up with things (Jason might describe this in slightly different terms..).  Anyway keys and cell phones seem to be the most challenging for me for whatever reason.  I think I almost have a sickness.  Would you believe I have even managed to lock myself out of the house WITH a key in my possession?!  (Naomi had put the spare key in the other side of the lock and apparently a key won't work when there is a key in the other side... who knew?!)  I'm telling you, I'm cursed!   The most annoying part to Jason (understandably...) is when we are rushing out the door and everything has to come to a halt while I find my keys.  You would think after almost 17 years of marriage I would have found a solution to this!!  Nope..  Jason's favorite example of my key sickness is the time I lost my keys during our newlywed days.  I was frantically searching as I was on my way to a nursing clinical and getting frighteningly close to being late because I couldn't find my stupid keys.  Anyway, long story short- I found them in the freezer.  Beside the ice trays.  See, I had gone for a run the evening before, came in to get a glass of water, set the keys down by the ice trays while I got my drink- perfectly logical!

So this evening the girls were going about their evening chores and Maddie was filling the ice trays.  All of a sudden she started cracking up.  I looked over and she was holding up Abbey's retainer!  At some point in her sleepwalking stupor last night, Abbey stuck her retainer in the freezer right beside the ice trays!

The apple doesn't fall far from the tree... 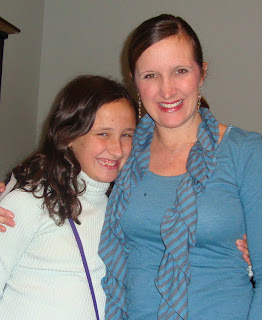 (this is several months old but I couldn't find a recent...)
Posted by Kelli at 1:45 PM

Oh, how this post brought back memories... Good job, Kelli. You know Jason won't get to tell his side, but you tell it oh so well. It is a good apple that fell from the trees! --papa

Best part... "There was the time shortly after we got married that he bolted up in bed and yelled "what the HE$%## is that?!" pointing at his grandparents armoire"

Thanks for the ammunition!

I always lose my keys. When I taught school, I had a student in charge of them during each class.