I don't have the emotional energy today to blog about sweet Maddie turning 10, but I can talk about her fabulous birthday cake!  I have always loved doing fun things for the girls birthday cakes.  When they were smaller, the cakes were mostly yellow cakes with bday cake ice cream in some fun shape or design.  Not being a huge fan of plain old birthday cake myself with Crisco icing, it's been fun as they've gotten a little older, to have them want something that actually tastes pretty good to adult's too.

This year I spotted a rainbow cake at a bakery I visited last weekend and knew it would be the perfect cake for Maddie- she agreed.  So I got online and googled (or goggled as my Memommy pronounces it... :)) "rainbow cake" and was very surprised at how many things came up.  Martha Stewart's was definitely the most popular- here is the link and the pretty pictures.  As I read this recipe though, not only did it sound very complicated to me, but it also didn't sound that great- I mean white cake with icing- and holy cow, look at how complicated that icing recipe is!  So I continued looking for something that I thought would actually taste better than a plain old white cake and I came across this recipe- Southern Coconut Cake that looked fabulous.  It looked to make about the same amount of cake as the rainbow cake recipe so I decide to go with it and it was SO WORTH IT!  SUCH a yummy cake.  I basically followed the directions for mixing the coconut cake and then switched over to the Martha Stewart rainbow cake recipe  for putting the cake together.  It was so much fun and such a hit.  Even my husband who is misguided enough to think that the words "too sweet" can actually be put together raved about how fabulous this cake tasted.  I've never made an icing like this either.   A combination of a meringue and cream cheese icing- so light and yummy.  If I do it again, I will actually probably double the icing recipe.  It was meant for the three layer coconut cake so there was not quite enough to go between the 6 layers of the rainbow cake and cover the top- but I improvised with more cream cheese, butter and sugar- can't have enough of cream cheese and sugar, right?  Here's what we did...


First, divide the batter into 6 bowls and color each one (I used gel coloring) 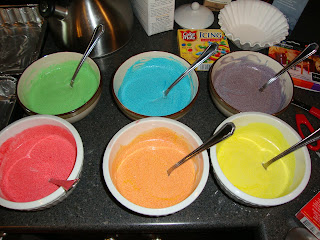 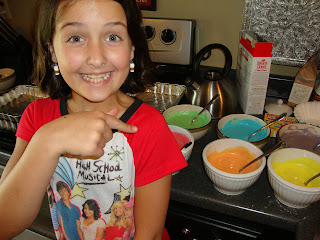 Since our lives are pretty much uprooted right now with all of our belongings being packed up, I used throw away pans and the only ones I could find were square... 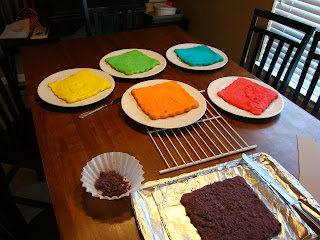 Next, the stressful assembly... 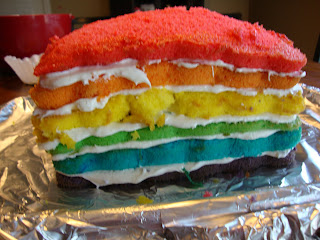 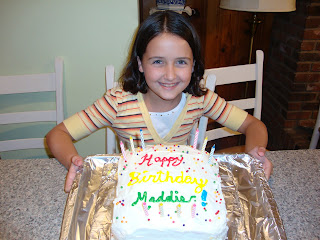 So much fun to cut into and see the rainbow surprise! 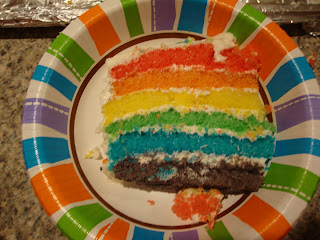 (and I thought you should see a pretty picture of Martha Stewart's cake since mine didn't quite turn out like this...)

YOUR cake looks way yummier than Martha's!!! Miss your awesome birthday cake skills! I asked kendra to make me a birthday cake this year :) hope she remembers!

hey - I'm pretty sure they must've used foam in the Martha pic :) Yours looks great!